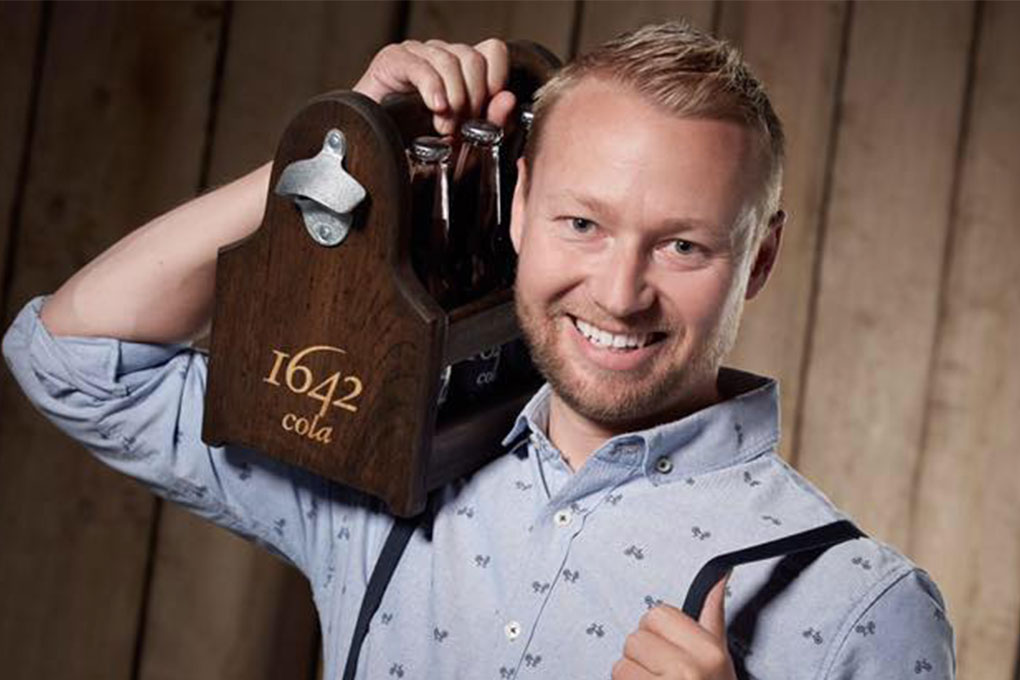 Bastien Poulain, creator of 1642 Cola, left his native Brittany to gain international work experience. But he put his travel plans on hold when arrived in Quebec. The entrepreneur was so head over heels that he decided to put down roots and launch his own soft drink company!

It all started in a Montreal poutine restaurant in March 2013. Poulain was out with a few friends and wanted to order a soft drink. Much to his dismay, only the two major American brands were on the menu. “I expected more from a city that prides itself on good food and drink!” says Poulain.

In fact, Poulain was surprised to find that the local cola trend hadn’t hit Quebec. In recent years, alternative sodas have taken off all over the world. In France, each region boasts its own soda.

Poulain was onto something. Three years later, he is now the proud creator of one of the first regional Québécois beverages: 1642 Cola. And his road to entrepreneurship has been quite the adventure!

Starting a business, but not at all costs

Bastien Poulain comes from a long line of entrepreneurs. His grandfather had a small electrical company, and his father had a placement agency. “I wanted to go into business for years,” he says, “but I didn’t want to start a business just for the sake of it. I only wanted to do it if I had a strong idea with potential.”

Before finding his big idea, he travelled the world, even working for six months as an assistant manager in a Chinese hotel. Once in Montreal, he had to start from scratch, working his way up from waiter to manager of a major hotel.

“At first, my goal was to get international work experience and return home to start my career,” he explains. But things don’t always go according to plan. He fell in love with Montreal and its two main cultural identities.

Poulain didn’t just see Montreal as a place to live; he saw it as an inspiration for his company. He wanted to create a local cola that honoured his new home, so he named his new soft drink after the year the city was founded — 1642. He thought his idea was strong enough to invest his savings, spend two years on product development, quit his job and dive in head first without a safety net.

Poulain made his public debut in May 2015, when he appeared on the Francophone version of Dragon’s Den. His hip and charming persona won over all four dragons: Alexandre Taillefer, Martin-Luc Archambault and Serge Beauchemin on air, and Mitch Garber afterwards.

It was the culmination of a project he had started working on full time in October 2014. He began with crowdfunding, raising $7,000 on Indiegogo.com. “That helped us get our name out there,” he says. Sweetened with maple syrup, 1642 Cola is entirely made in Quebec, even the bottle and label. “I wanted the product to be true to its roots,” he notes. “It’s a local product made with local ingredients.”

Poulain started producing and distributing his product before pitching it on TV. The dragons were immediately impressed, both by the idea and Poulain’s holistic approach.

A strong head start doesn’t ensure a company’s viability. While he did well on Dragon’s Den, he still has some challenges to overcome. “Financing is one,” he admits. “National Bank was an important partner. They gave us a line of credit to fund production.”

It was also necessary to restructure operations, he explains. “At first, distribution was tough, because we were working with small, local distributors all over the province. It was hard to guarantee a consistent supply.”

He solved this problem through an agreement with Orange Maison, a Lassonde subsidiary specialized in distribution. “Chain stores like to see that you’re working with a major distributor. They know that they’ll get a steady supply.” How did Poulain convince Orange Maison to distribute his beverage? It was all about timing, he says. “Gourmet soda sales are on a slight upswing, at the expense of major brands. Consumers are willing to pay more for quality. This is how Lassonde wanted to position itself.” You could say that Poulain is in step with the times!

His answer? “Mayor Coderre told us that he likes to stay away from soft drinks since he’s on a diet!” But Poulain hasn’t given up hope on his cola being featured during the festivities. We wish him a good 375th anniversary!

Tags :
In the spotlight, Start-up