Geoff Molson at the Helm 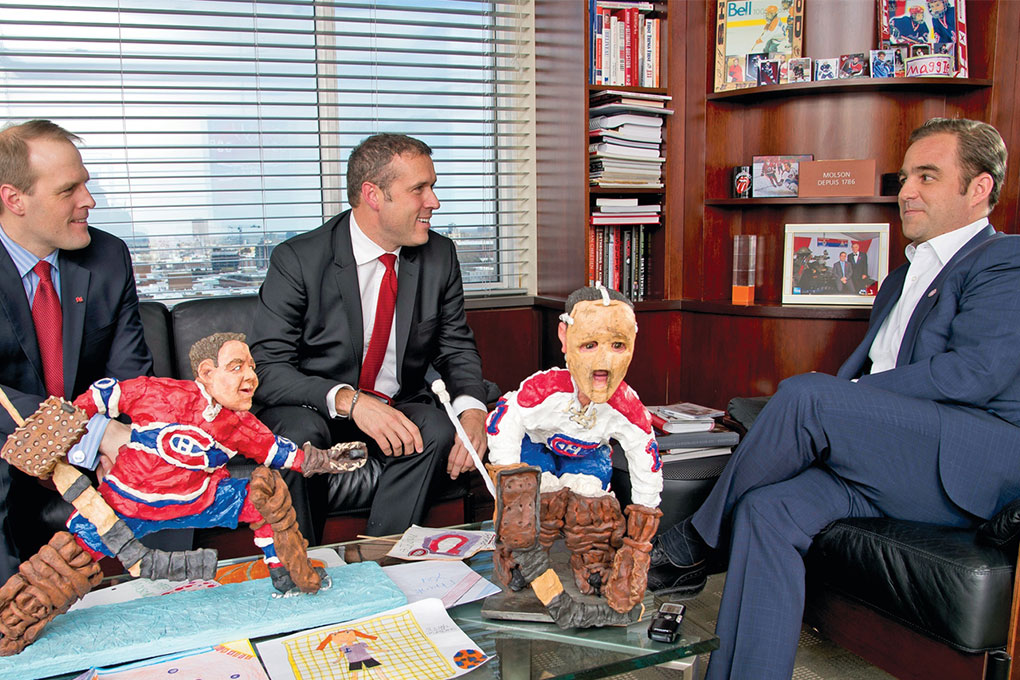 From this corner office at the Bell Centre, you can see Montreal spread out before you right down to the river. To say that Geoff Molson, owner of the building we find ourselves in, has Montreal at his feet would not be doing him justice — he is a rather humble person. But there is some truth to the statement. Éric Bujold, President, National Bank Private Wealth 1859, and Martin Lavigne, President, National Bank Financial — Wealth Management, met up with him to chat about business and hockey.

Since June 2011, Geoff Molson has been President and CEO of the Groupe CH limited partnership, and owner of the Canadiens Hockey Club, Evenko and the Bell Centre, without forgetting his role as ambassador for Molson Coors. Groupe CH also bought Équipe Spectra last December. All this makes him an important player on the economic and cultural stage of our city, and of the whole country.

His best move? When he took over the skating rink. “There have been highs and lows in my career, and it’s important to have both,” he explains carefully. “But I think the decision to buy the Montreal Canadiens four and a half years ago was a good one! It’s what defines me today as a businessman and what motivates me every day. It was during the financial crisis in North America, a period when interest rates were very low and the dollar was very strong. All this made the risk greater, but it also contributed to the success of the takeover. The Montreal Canadiens mean a lot to the population of Quebec and North America in general. I’m very proud to have been able to regain control of this team.”

We’re talking about an institution here. And Geoff Molson must work with elements that are unfamiliar to many entrepreneurs: emotions and immense popularity. “You know what I’m talking about, everybody does: the day after a defeat, emotions run high. I’m responsible for my own emotions and I need to be in control of them and manage them in a positive way. I’m on Twitter, like most of the fans. After we lose a game, they can be really harsh! Yes, people are annoyed, but it’s because they love their team! It’s actually a good sign that they’re talking about us, whether what they’re saying is good or bad. My role is to offer support,” he adds. “Sure, I’m the one who provides the managers with the means to succeed, and I ask a lot of questions. But at the end of the day, my role isn’t to make decisions for them, I’m there to support their recommendations. I learned that from my dad, it was his approach to life: find good people, trust them and stay close to them.”

A well-informed leader, Geoff Molson is also a fan. He watches all the games and knows everything about the club. He sounds out the level of fame that the Canadiens have beyond the province limits. Éric Bujold asks him whether he has detected any rivalry with other team owners: “We work very well together,” Geoff Molson reassures him. “The only benefit of the lockout was that we all got to know each other a lot better! My relationship with Toronto, off the ice, is excellent. And I have a lot of respect for them . . . again, off the ice.”

He would also welcome a return of the Nordiques to Quebec, because it would be good for hockey. “This sport is doing very well. From a business point of view, the live games are generally very popular. It’s in TV channels’ interest to broadcast live sporting events, because they appear to be the only live events that interest younger generations ” he explains. His flair has also led him to support 24CH, a media strategy with resounding success (certain episodes are even more popular than some games!): “The goal was to bring the Canadiens to life outside of the games. First, because I believe that at the Bell Centre the chances for growth are slim. Ticket prices are pretty high, the sponsors are there, there are private and corporate boxes and food is sold there. We had to come up with other ideas. Secondly, because our players are now international stars. It’s harder for them to make themselves known to the public and to show how hard they work to win.”

Values to be shared, a different world

Despite the successful gamble that was the acquisition of the Montreal Canadiens, Geoff Molson agrees that he’s a careful strategist. A management perspective where speed isn’t always an ally and where advice is very welcome. Martin Lavigne asks him what was the best piece of advice that he ever received: “It comes from a quote by Norman Schwarzkopf and is very simple: ‘When in doubt, always do the right thing’ You can always take shortcuts, and people do, because we tend to want to win in the short term, we want to have an advantage. But in the long term, it might not be the right solution. When I’m faced with a complicated decision, I always come back to this. When I was a kid, my dad was in charge of a big public company, and his approach was always the same. He passed this down to my brother (Andrew Molson, owner of the National law firm) and me. Each decision that we take, be it big or small, must be made with our shareholders’ best interest in mind.”

In business for more than 230 years now, the Molsons are at the head of a world that is particularly well rooted in Canada. “Between the brewery, National, the Canadiens, Evenko and Spectra, we feel very well established! Today, the seventh generation has the potential to invest and give back to Montreal. Now we’re getting ready for the eighth generation,” explains the father of four.

Éric Bujold also asks about the balance between private and public life, an unknown element in the time of Geoff Molson’s father, who was a much less visible owner of the Canadiens than his son. Geoff Molson knows how to handle these challenges: “The acquisition of the Canadiens changed my life, it’s a very public role. Seemingly overnight, you become a public figure! We do our best to find that family balance, spending a lot of time together on weekends. Back when my father owned the Canadiens he wasn’t really known by the public, because there was no Facebook or Twitter, there were no cameras. The only way you’d catch a glimpse of him back in the 70s was to attend a live game! And the next day, you’d have to pick up the newspaper to find out what happened. From the time he was six, my son has been watching the games on NHL.com. In a mere five minutes he sees every goal, every penalty, it’s incredible! I give a speech and everyone knows about it — it’s impossible to keep anything hidden. Again I reiterate the importance of communicating and being honest.”

Accepting being famous all while staying down-to earth with his children is also a question of protection: “My kids are always surprised when people ask for my autograph or picture. And that’s OK! They have one life to live. I had the chance to live a privileged life. When I was younger, I knew that my father was head of a brewery, but that was it. My kids are much more aware of what’s going on. Google has the answer to everything! All they have to do is “google” my name and they’ll learn quite a bit about me.” And also learn that we have to win... “winning, that makes all the difference!”

It is as part of a series of interviews exploring the success of local business executives that Martin Lavigne, President of National Bank Financial Wealth Management and Éric Bujold, President of National Bank Private Wealth Management, 1859, had the chance to meet Geoff Molson, President and CEO of the Groupe CH limited partnership, and owner of the Canadiens Hockey Club, Evenko and the Bell Centre, and ambassador for Molson Coors.