Shopping Guide: Where and How to Run Errands in Canada 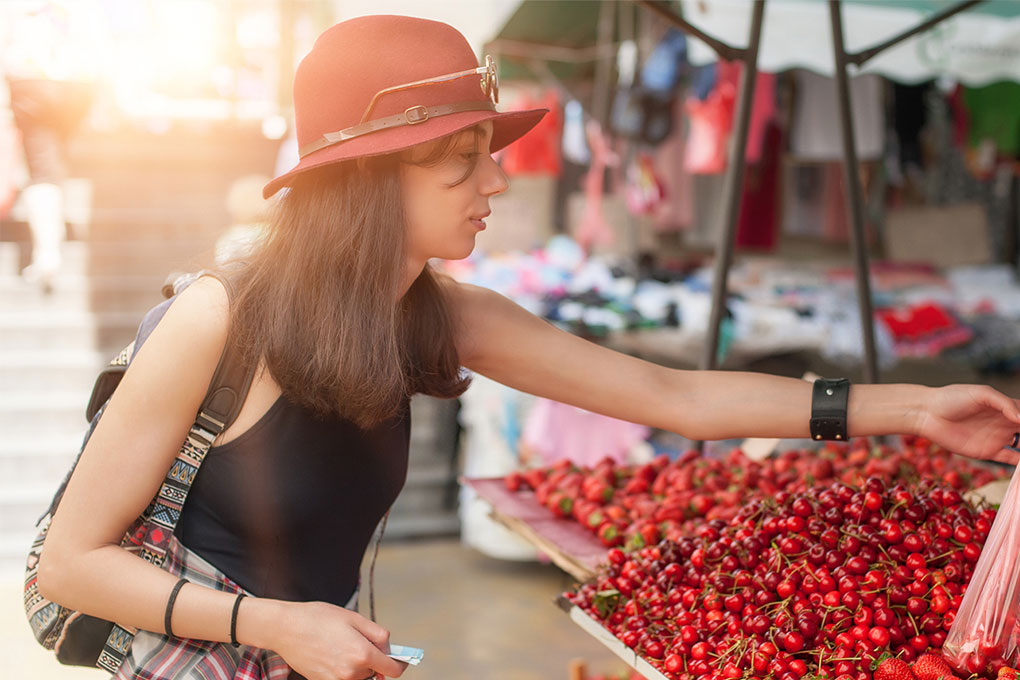 Settling down in a new country means having to adjust to living standards and habits that are very different from those we are accustomed to. Going to the market, paying for coffee, finding a dentist… Even the most common daily tasks can be affected. Here is a short guide on how to run errands in Quebec and Canada.

Where can I find…?

Out of milk or bread? A fuse needs to be replaced on the stove? Convenience stores, with their extended business hours – often from 8 am to 11 pm – can meet these kinds of needs. However, convenience stores that sell fresh fruits and vegetables are quite rare.

To purchase fresh food and other grocery items, you’ll have a better chance at the supermarket – or at public markets – also called farmers markets, which can be found in most large cities.

In Quebec, beer and entry-level wines can be purchased at the supermarket or convenience store. In Ontario, the Beer Store or a branch of the Liquor Commission Board of Ontario (LCBO) is where you can buy alcoholic beverages. Moreover, across the country, the true wine and spirits experts are government corporations such as the Société des alcools du Québec (SAQ) and the Liquor Corporations of the different provinces.

Good to know: the role of pharmacies (or drugstores) in Canada goes way beyond the health care field. You can find a vast selection of beauty, personal hygiene and cleaning products, as well as stationery, small electronic devices and even potato chips!

On weekdays, stores are often open from 10 am to 6 pm, and until 9 pm on Thursdays and Fridays. Stores are also open on Saturdays and Sundays, generally for shorter periods than on weekdays.

“Being able to do my grocery shopping in the evening or on Sundays has changed my life!”, says Anaïs Trocherie concerning the extended business hours, which are longer than what she was used to in France, which she left behind five years ago to pursue studies at the Université du Québec à Montréal.

Indeed, in urban centers, there are many food stores and drugstores open until 9 or 10 pm every night, even on Sundays.

In Canada, displayed prices usually do not include sales taxes. Taxes are calculated and added to the price of the products at the checkout counter. Many provinces add their own tax to the federal government’s Goods and Services (GST) 5% tax.

So, between the absence of a provincial tax in Alberta and the Yukon, the 9.975% Quebec sales tax added to the amount after GST, and the Harmonized Sales Tax (combining federal and provincial taxes) of 13% in Ontario and New-Brunswick, taxes can be quite confusing!

Not to mention that certain products are tax exempt, such as essential food items and prescription drugs.

“In the beginning, I just couldn’t understand how taxes were applied”, remembers Anaïs Trocherie.

“Even when I set a budget, I would always go over because of taxes, remembers Zied Boudhra, who settled in Quebec last summer. However, the native Tunisian quickly learned to mentally calculate the price of the items he plans to buy.

For her part, Anaïs Trocherie leaves it up to technology. A variety of smartphone apps allow one to calculate prices before taxes according to one’s province or Canadian territory.

Zied Boudhra was also surprised by Canadian tipping habits. Although no law forces clients to pay this gratuity, in restaurants and bars, a standard 15% tip is left for the waiter or waitress. “It doesn’t upset me to pay a tip, he explains, but I would rather have it reflect a real appreciation of the service received.”

This point of view is shared by Abdul Lateef, originally from Delhi: “In India, if the service and the food are really good, the tip can go as high as 25%. If the evening was terrible, the tip may fall to 7 or 8%.” In Canada, however, the gap is much smaller: give or take a few percent indicates our level of appreciation.

It is also basic etiquette to give a few dollars at the hair salon, to the taxi driver and the restaurant or grocery delivery person. At cafés and fast food restaurants, smaller change is sufficient.

Per pound or per kilo?

In the 1970s, Canada converted to the metric system, but imperial units still rub elbows with metric units.

For food sold by weight such as fruit, vegetables, meats and cheeses, prices are often marked per pound (454 g). The price per kilo is marked in smaller characters.

Moreover, you don’t need to weigh the fruits and vegetables yourself. They are weighed at the checkout counter.

Between a bottle of mustard at $2.99 for 400 mL and another at $3.89 for 475 mL, which one is the least expensive? To compare the prices of packaged products offered in different formats, the trick is to look for the label on the front of the shelf indicating the price per quantity of 100 mL or 100 g.

In the renovations field, the imperial system still reigns. Nails, planks and pipes are still measured in inches and feet. Luckily, measuring tapes sold in Canada are marked with both systems of measure.

Buyers can also benefit by familiarizing themselves with the Price accuracy policy [French only] for prices in effect in their province, states Katy Howick, of Petites-Mains, an integration organization based in Montreal.

“Women who receive our budget training courses find this information interesting, but they often regret not having been made aware of this sooner”, explains the social worker.

Generally speaking, it is easy to get an exchange, a refund, or a credit note for a defective item or for an item you don’t like. This is what Abdul Lateef observed: “Here, exchanges are easy and fast. For example, one time, I bought shoes that were too small for me and I was able to exchange them without a problem.”

The store’s exchange and/or refund policy usually appears on the sales receipt, which is needed for this type of transaction.

The near-impossibility of bargaining is another Canadian characteristic that Katy Howick discusses with the participants of the integration program she heads at Petites-Mains: “When we bring them to the public market, many of them want to negotiate the price of food, because this is how it is done when they go to markets in their native country. Here, we simply pay the displayed price.”

With that said, negotiating prices is a practice that still exists in Canada, but it is something that most people reserve for buying used goods (especially at a yard-sale) or for big transactions like buying a car or a home. For example, it is completely normal to make a purchase offer on a home which is lower than the price advertised by the seller. The seller generally responds with a counter-offer, and the negotiation will carry on like this until the two parties agree on a final purchase price.

When starting your new life in Canada, these tips should help you better understand the rules, both written and unwritten, that govern our country's commercial transactions. However, it will surely take you some time to get used to all the subtleties, but don't worry, the Canadian population is already multicultural. You certainly won't be the first newcomer to forget a tip at a restaurant or to try to negotiate the price of a cordless drill at a department store... no one will hold it against you!

Find more tips and advice about integrating and immigrating to Canada by signing up for the National Bank’s newsletter .