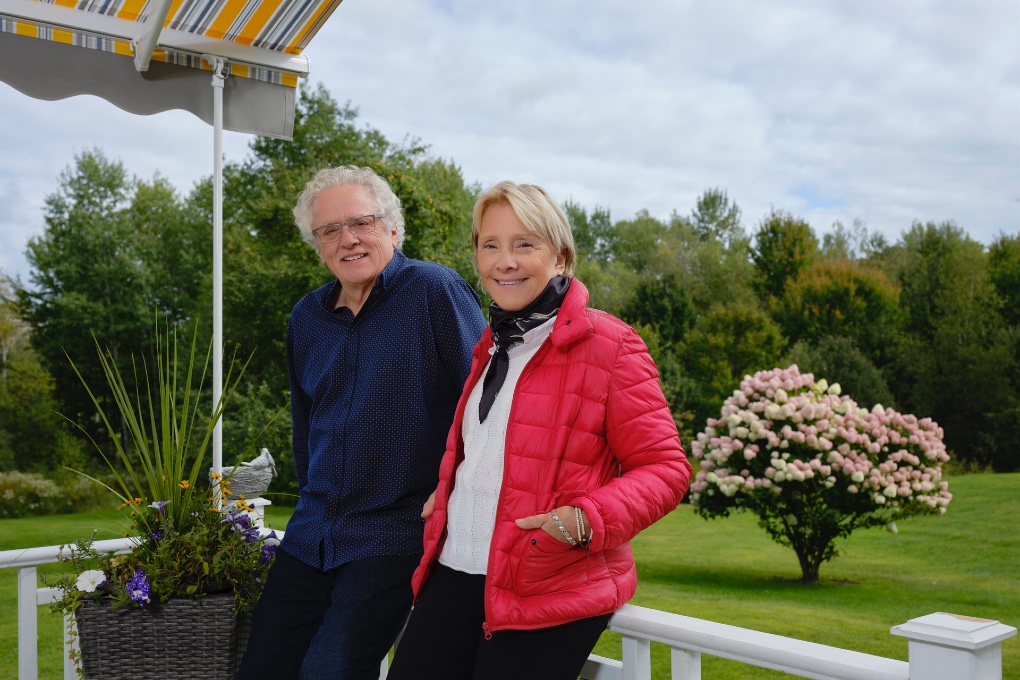 She had a career as an investigative journalist; he was an engineer. Driven by their desire to stay active and make an impact, Françoise and Pierre are enjoying their retirement by putting their experience to the service of the community, while cherishing their peaceful life in the country. Their dream came true thanks to their savings and their ability to look ahead.

The last thing Françoise wanted when she retired from the broadcast industry in 2010 was to spend time twiddling her thumbs. Luckily, for the last nine years, she’s been active on different fronts as a volunteer. “I cofounded “Soccer de Rue Montréal”, an organization for adults who are homeless or living in unstable conditions. Then I was on the board of directors of the “Centre d’intégration scolaire pour les enfants en difficulté,” she says enthusiastically.

An active woman with boundless energy, she volunteered to write for the local paper soon after the couple moved to the Eastern Townships a year ago. “I need to remain an active citizen. When you retire, you have full ownership over your life, so it’s important to maintain your pride in yourself and what you do.”

Their big move took place in 2017 when Pierre also retired – or rather when he semi-retired, after he sold his design studio specialized in the environment. “We promised ourselves that we would leave Montreal and move to the country, not too far from our children and grandchildren,” he said. “We fell in love with this beautiful country home.”

“You only live once”

Some warned them against moving outside the city at their age. But to them, “escaping the orange cones” was clear choice to make. “We only have one life to live,” argues Françoise. “We were able to buy a house that we love because we planned ahead.”

To get as close as possible to your ideal retirement scenario – whether it involves volunteering, moving, realizing projects that matter to you, or travelling – you need to give yourself the means by setting savings goals and putting money aside. The sooner you start, the bigger the leeway you’ll have to meet your needs and prepare for the unexpected.

As a former journalist she has a pension fund, while he has various investments as an former engineer. They each contributed to an RRSP and neither has any debts, other than their mortgage. “It’s up to us to come up with our dream retirement and work towards it,” remarks Françoise. “For years, I saved a sum every month. Now I don’t regret it. Otherwise, life wouldn’t be as comfortable or enjoyable.”

“I was always careful to save enough for my senior years,” adds Pierre. “When I started working, I took out a line of credit to contribute to an RRSP, and I paid it off throughout the year. Over time, I didn’t need to borrow to save anymore.”

Freedom and peace on the horizon

The couple wanted to build a budget so they could travel together when they retired. Throughout the years, they’ve gone on a number of memorable trips, Argentina, France, Italy, Croatia… “I promised myself that I’d go to the desert at least once in my life,” said Françoise. “Next stop: Namibia!”

“Our financial planner helped us figure things out. We still meet with him once or twice a year,” she says. There are as many types of retirement as there are retirees. Meeting with an expert can help you set up the best strategy for your particular situation.

Now that their financial future is set, Françoise is at peace and Pierre feels free. “We get to choose what we do. That’s worth its weight in gold!” says Françoise. “I do what I want, when I want,” her partner happily adds.