Planning for retirement after turning 50 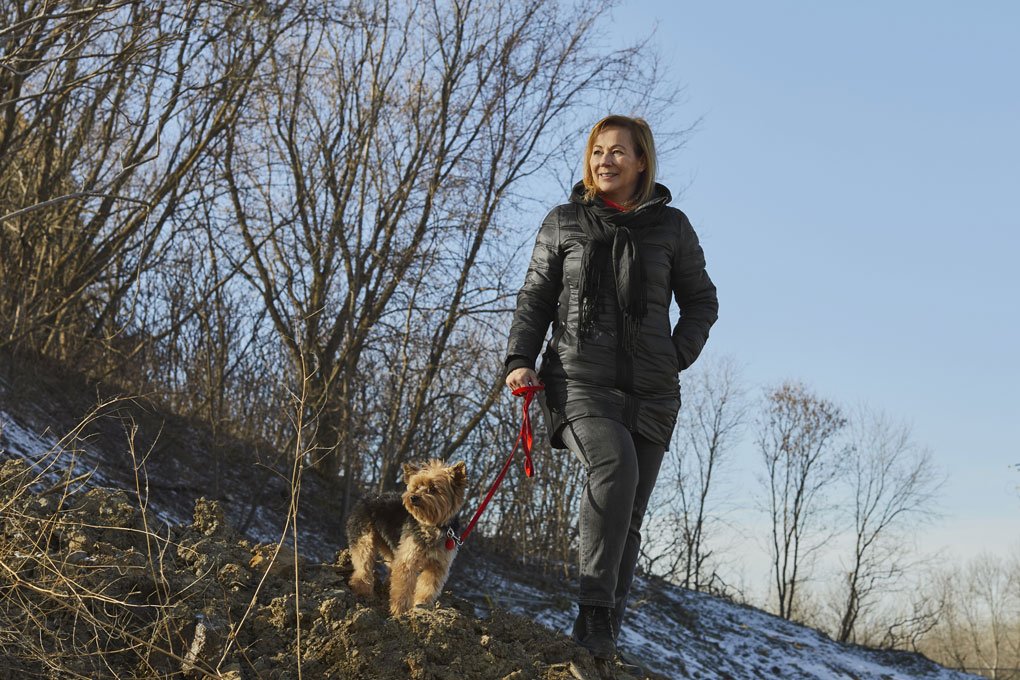 After having two kids, going back to school and changing careers, Michèle took control of her retirement planning at 54 years old. Life’s ebbs and flows are such that many of us delay planning for retirement. But it is never too late. Learn about Michèle’s path and check out a wealth of advice on how to prepare for retirement after 50.

Michèle, an energetic 54-year-old nurse, seems very busy. She’s always testing out new recipes on her two adult children when they come over. There are also daily walks with her beloved Yorkshire Terrier Choopi, who never leaves her side. But appearances can be deceiving: Michèle’s journey has included its share of twists, turns, surprises and challenges for her to overcome!

Michèle recently faced health issues that forced her to take a leave of absence from work. “I was going a bit stir-crazy at home. It compelled me to re-evaluate my choices, habits and, most importantly, my future.”

When she realized she was barely a decade from retirement, the 54-year-old had an epiphany: it was time to take control.

Michèle isn’t the first person to begin preparing their retirement after hitting 50. “Many people put off planning, whether out of fear of failing to reach their goals, because they don’t see the short-term benefits or because they mistakenly believe the process to be painstaking, which isn’t the case,” says Mohamed Wakkak, a financial planner at the National Bank.

Michèle was worried about her future. “I considered my leave of absence to be a major bump in the road. I wasn’t prepared for such a big drop in salary, especially at my age.”

While she didn’t have a detailed retirement plan, Michèle did manage to put away modest sums each year. Shortly after entering the job market in her early 20s, she had a colleague, barely older than her, who hammered home the importance of savings. Ever since, she has made small annuals deposits in her personal RRSP.

“Back then, I would contribute $1,000 a year. Spread out over each paycheque, I was never really aware of the amount. I always say that when it comes to money, how we manage it is more important than how much we have.”

Since going on leave a year ago, the nurse has paid closer attention to her spending in order to set up a budget. She has evaluated her finances and made a list of her assets and her debts.

To “let the numbers speak for themselves,” she sought out expert advice. “I don’t love working with numbers,” says Michèle, “so I found someone who does. I wanted to make sure my budget was solid and, more specifically, that my retirement goals were realistic. That’s why last June, for the first time ever, I met with a financial planner.”

“There’s no need for fatalism—50 years old isn’t too late to take control of your retirement planning,” says Mohamed Wakkak. “Meeting with an advisor is well worth it, if only to get an accurate picture of your situation. They will propose reasonable solutions for aligning your savings potential with your objectives. All of that will be consolidated in a document called a retirement plan. It determines the amount of money you will need once retired. That sum takes into account your goals, your lifestyle, inflation and investment returns.”

“If I had to do it over again, I would have met with an advisor much earlier on,” says Michèle. “Now that I have a retirement plan, I feel much more secure. I feel like I’ve taken control of my future, which is really reassuring.”

While mapping out Michèle’s retirement plan, her advisor proposed products and mechanisms that best suited her client. She then settled on strategies that will use the different incomes streams on which Michèle depends in the most effective way possible.

“I have personal and group RRSPs, annuities, a TFSA, a few investments and my condo, which is paid off,” says Michèle. “To better grow my money, my advisor reorganized the amounts I had placed in all of these. Without her, I would never have been able to do that.”

To stick with the retirement plan, Michèle challenged herself to cut down on spending as much as possible. Restaurants, clothing, gifts and visits to the hairstylist became increasingly rare. “Before I even open my wallet, I now ask myself, ‘Do you really need this?’”

“I’ve really tightened my belt, but I’m motivated. I’m saving for my retirement without taking on debt, and that’s what’s important. The fact that I’m committed to being eco-friendly also helps me stick with my new habits. By trying to reduce household waste, I avoid single-use items. Over the long term, that means I’m spending less.”

Michèle’s financial planner suggested she monitor her spending on a weekly basis to make sure she’s within her budget.

“Before spending anything, I compare prices. It’s amazing how taking that time can lead to big savings,” says Michèle. She did it with her insurance, her telecommunications providers and her groceries. For example, after comparison shopping, she switched out her cable subscription for a streaming service. “I now have an extra $100 a month that I can put toward my savings.”

Ready for the future

For the time being, Michèle is hewing closely to her retirement plan and her budget as she looks forward to a return to nursing. “I have 10 years left before retirement and I want to take advantage of it. I love my job!” She hopes to continue working part time after the age of 65. “There’s a financial benefit to that, of course, but mostly I want to stay in shape physically and mentally. And I don’t want to be bored!” When asked how she envisions her retirement, Michèle answers enthusiastically that she hopes to travel a little—and to take care of her future grandchildren!

What about your own retirement? Have you begun planning? Feel free to ask an advisor.