Top 5 things that only happen to other people 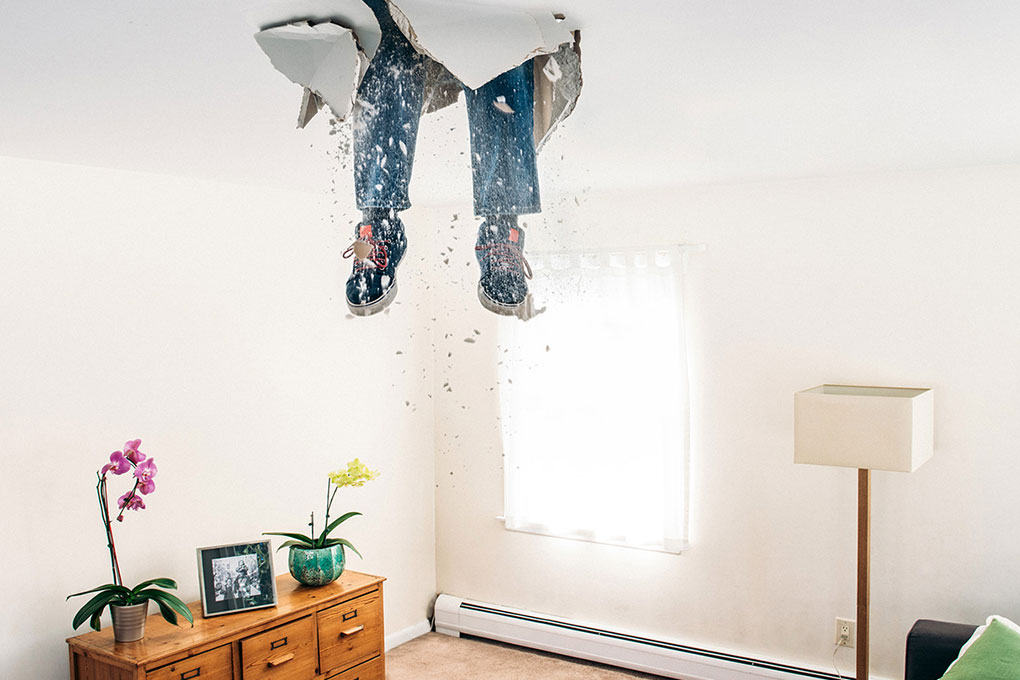 We all say the same thing when we’re offered insurance or warranties: meh, only other people get that unlucky. After all, when you’re young and careful, what could possibly go wrong? Here are five misadventures that prove that in life, anything can happen

How did such a harmless animal manage to sideline you?

I was trying to catch the family cat one night to bring it into the house, but he wanted nothing to do with it and bit my hand badly. The wound got infected and oral antibiotics weren’t strong enough to clear it up. In the end, I needed intravenous antibiotics, and spent five days in the hospital.

You’re a boom operator on film sets and you play drums. With one hand out of commission, did you have to stop working?

Yes, I missed work. I’m self-employed so I don’t have any sick days. It was an expensive accident, in the end.

You must have been happy to get out of the hospital…

I was, although when I got to my car, I saw that one of my windows had been smashed and some of my work equipment had been stolen. It really wasn’t my day…

If Simon hadn’t been able to go back to work, he might have had serious financial problems. Disability insurance, even just on his credit card, would have given him the boost he needed to get through. Of course, you’d need to think about that before having an accident or going on a cat hunt!

Felix, your bike was destroyed. How did you manage to trash it so thoroughly?

I got “doored” while I was riding in île Sainte-Hélène. There was a lot of traffic at the La Ronde exit, cars were standing still, and a passenger wanted to go talk to his friend three cars away. He opened the door on me, and my new high-end carbon bicycle was destroyed. The frame was bent, there was thousands of dollars in damage. Thankfully I wasn’t badly hurt, a little banged up maybe, but nothing serious – my helmet saved me.

Did you lose it on the careless passenger?

My bike was insured. When it’s your passion and you save up to buy a competition bike, insurance is a given. Knowing that it would be replaced helped prevent me from going after the guy who opened his door… I told myself: it’s just carbon, that’s what insurance is for.

Thanks to his helmet, Felix got out with just a few scratches, but this is the kind of accident that could have left him seriously injured or even cost him his life. Life insurance policies exist to avoid plunging our loved ones into financial hell when we die, which is particularly important if you have a mortgage with your partner, or if you have kids. It may not be fun to think about, but it’s a necessary evil, much like wearing a helmet!

Your beach vacation was no day at the beach, as I understand it.

I had just started a new job two weeks earlier. We went to Virginia Beach for construction holiday. We set up our camping gear, went down to the ocean… and pow. I got hit with a huge wave right in the ear.

It wasn’t just a temporary discomfort, like cutting your foot on a seashell or getting a sunburn?

At first, I thought my ear was just blocked, but when I got home I realized that I actually couldn’t hear anything anymore. I also had vertigo. I consulted a specialist, and a hearing test confirmed that I was deaf up to 90 decibels. From that ear, I could only hear very loud noises, like the engine of a car. On top of everything, I lost my job shortly after getting back from vacation.

Not easy to start job hunting again after a misadventure like that. Thankfully, the government offers employment insurance . Private insurers offer it too. As a result, workers don’t need to stress too much while they update their CVs.

What were you doing in the Rockies?

I work as a pilot for a helicopter company, and my lodgings are right on the base, which is at the foot of the Rockies. Sometimes I like to take some time alone. On that particular day, I had decided to go play my guitar out in nature. I sat on the edge of a cliff with a beautiful view of the lake and the mountains. While I was looking for something in my case, my guitar slipped and fell off the edge of the cliff. I couldn’t believe it had actually happened. I looked down expecting to see it smashed into a million pieces, but it survived. It was floating in the lake.

Were you able to get it back?

I was able to fish it out of the freezing cold water. I tried to get back to the base as quickly as possible, but on the way my muffler fell off on the rocky roads. I tried to do a quick repair, but it was already dark and I could hear a bear growling (ah, the fauna of the Rockies!). I hurried to put my tools away and drove back with my muffler dragging on the ground under the car. Unfortunately, with all the water damage my guitar was finished. It was a Little Martin that I really loved, and it was worth several hundred dollars.

When you insure your goods, the general rule is that a portion of the losses needs to be covered by the insured. That’s the deductible. So, if you have a loss of $1,500 and a $500 deductible, the insurer will pay $1,000. If the value of Jerome’s guitar had been higher than his deductible, he would have been able to declare his loss and gotten a new guitar. Of course, even the best insurance in the world couldn’t replace the sentimental value of his instrument.

How did you end up witnessing so many fires?

I was working for a disaster clean-up company in the Quebec City area. I needed to listen to the firefighters’ radio frequency and get to the fire sites so the company could sign a contract. So I’ve seen a lot of fires.

Yes. The first time, a man with a basement apartment had fallen asleep on his sofa and forgotten to turn off the stove. Thankfully, the fire was limited to his apartment. Then around six months later, there was a second call to the same address, and it was the same guy, for the same reason! Except that this time, the fire had spread to three floors. Fortunately, everyone was safe and sound. But because the renter who was at fault wasn’t insured, the owner of the building needed to absorb the cost, as did several other renters.

Even though they weren’t responsible for the fire?

Yes. They needed to replace their damaged goods and also, in some cases, pay for housing while work was being done to their rental units. Several of the renters were students and didn’t even know if they were covered by their parents’ insurance. Some of them told me they regretted not having taken out insurance after the first fire, thinking that it could never happen twice.

In addition to thinking about taking out home insurance, renters in the building could also have asked themselves if life insurance might be useful for them. After all, we don’t choose our neighbours, and some are less careful than others.