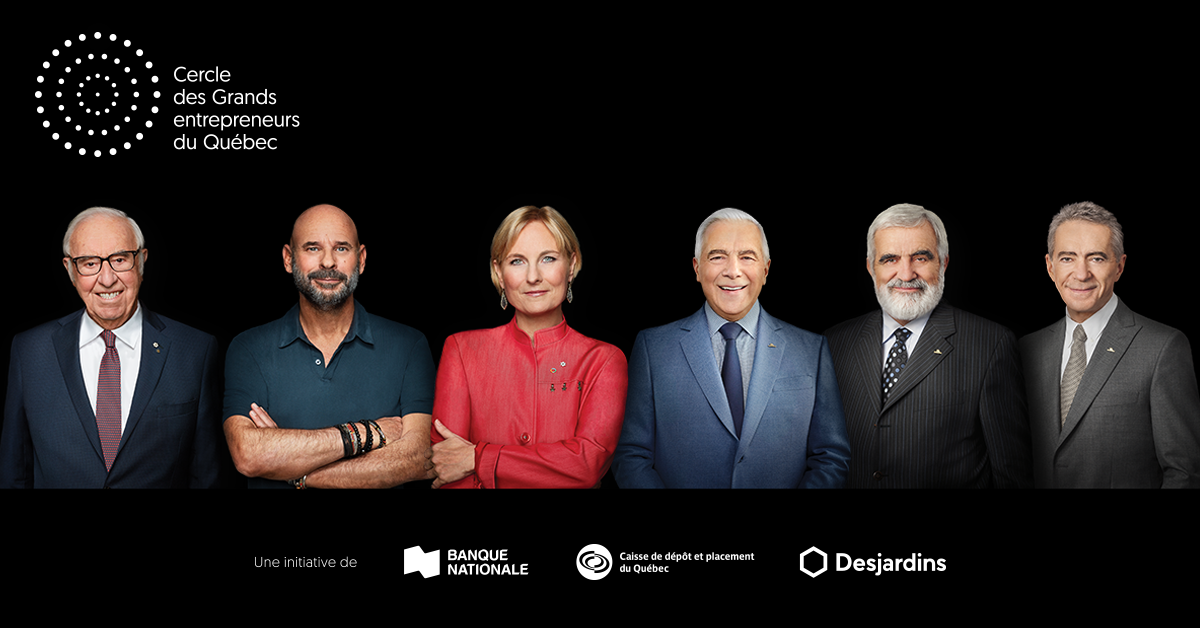 Caisse de dépôt et placement du Québec, National Bank and Desjardins Group have joined together for a second year to induct exceptional entrepreneurs into the Cercle des Grands entrepreneurs du Québec. A new yearly event, the Cercle showcases the achievements and commitment of men and women whose actions have contributed to Québec’s entrepreneurial vitality and economic development.

The Cercle recognizes entrepreneurs who inspire through their leadership, perseverance, creativity and integrity and who have become models for a brand new generation of entrepreneurs.

“Through the Cercle, we celebrate entrepreneurs who have redefined the limits of their industry and exported Québec innovation and ingenuity well beyond our borders. These exceptional people have become true role models for future generations who, in turn, will play a decisive role in continuing to build the new economy of Québec,” said Michael Sabia, President and Chief Executive Officer of Caisse de dépôt et placement du Québec.


A legacy firmly focused on youth

The extraordinary entrepreneurs recognized this year all have one thing in common: helping young people achieve their full potential. In addition to heading industry-leading companies, these honourees have helped the generation following them by sharing their knowledge and expertise.

“National Bank was founded in 1859 by entrepreneurs for entrepreneurs. For nearly 160 years, we have consolidated this heritage in many ways – from advising our entrepreneurs at all stages of their careers to promoting the development of efficient ecosystems for startups to recognizing the exceptional careers of our extraordinary entrepreneurs. Beyond their remarkable contributions to Québec’s economic development, they have inspired the entrepreneurial momentum we are currently experiencing,” stated Louis Vachon, President and Chief Executive Officer of National Bank.

The Cercle des Grands entrepreneurs du Québec's travelling exhibit invites the Montréal public to learn about the history of its honourees in the Atrium of Caisse de dépôt et placement du Québec (February 6-8), at National Bank Tower (February 10-16) and at Complexe Desjardins (February 18-23), after which it will tour Québec’s various regions. This rich, exclusive and interactive content will be displayed for free. The content can also be viewed at cercledesgrandsentrepreneurs.com, where Quebecers can also learn about the careers of the first Cercle honourees.

“Daring, perseverance and innovation – three words that encapsulate the inspiring careers of the six entrepreneurs honoured this year,” added Guy Cormier, President and Chief Executive Officer of Desjardins Group. “In addition to creating wealth across Québec, they seized opportunities to showcase their know-how on an international scale.”

The recipients were selected by a jury comprised of members of business communities, Cercle members and entrepreneurs:

About National Bank of Canada

With $262 billion in assets as at October 31, 2018, National Bank of Canada, together with its subsidiaries, forms one of Canada's leading integrated financial groups. It has more than 23,000 employees in knowledge-intensive positions and has been recognized numerous times as a top employer and for its commitment to diversity. Its securities are listed on the Toronto Stock Exchange (TSX: NA). Follow the Bank’s activities at nbc.ca or via social media such as Facebook, LinkedIn and Twitter.

Desjardins Group is the leading cooperative financial group in Canada and the sixth largest cooperative financial group in the world, with assets of $272 billion. It has been rated one of the Best Employers in Canada by Aon Hewitt. To meet the diverse needs of its members and clients, Desjardins offers a full range of products and services to individuals and businesses through its extensive distribution network, online platforms and subsidiaries across Canada. Counted among the World’s Strongest Banks according to The Banker magazine, Desjardins has one of the highest capital ratios and credit ratings in the industry.