The Quebec Foundation for Athletic Excellence Awards $126,000 to 38 Student Athletes through the National Bank Bursary Program 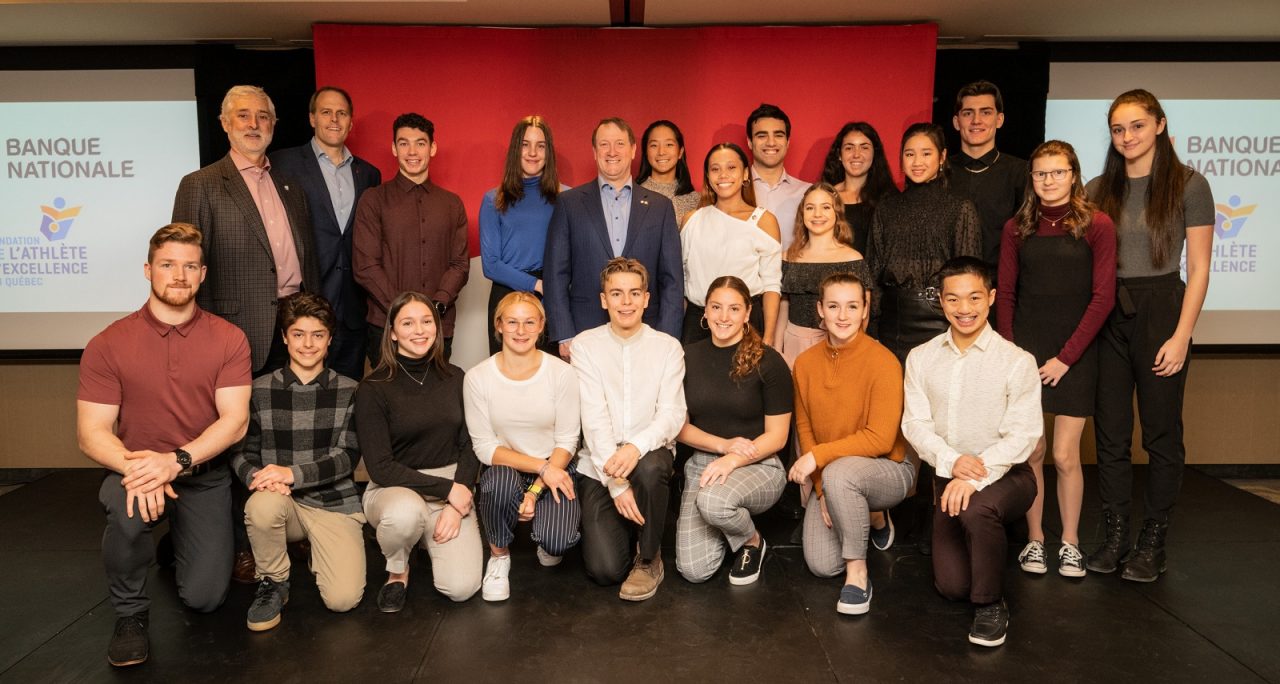 As part of the 28th National Bank Bursary Program, the Quebec Foundation for Athletic Excellence (FAEQ) has awarded $126,000 in individual bursaries of $2,000 or $4,000 to 38 student athletes. The ceremony was held today at National Bank's head office.

The National Bank Bursary Program recognizes student athletes in the Hopeful, Elite, and Excellence categories between the ages of 13 and 26 from all over Quebec.

"We're very happy to be continuing our long-standing collaboration with the Quebec Foundation for Athletic Excellence. As well as encouraging young people who are models of perseverance and determination, we believe that each and every recipient can encourage other young people to adopt healthy lifestyle habits, continue their studies and get involved in the community," said Louis Vachon, President and Chief Executive Officer of National Bank.

"We're very proud to be associated with National Bank, a prestigious institution and loyal partner. Over the years, the National Bank Bursary Program has effectively supported more than a hundred student athletes, some of the most inspiring in the province," stated Claude Chagnon, President of the Quebec Foundation for Athletic Excellence.

For this edition of the National Bank Bursary Program, 21 Academic Excellence bursaries were awarded, 16 Athletic and Academic Support bursaries were distributed to promote the balance of sport and education, and one Perseverance bursary was awarded to highlight the determination of an athlete facing difficult circumstances.

From among the hundreds of student athletes supported by the Bank over the past decades, some have truly made their mark internationally. They include tennis player Félix Auger-Aliassime, who is one of the top 25 tennis players in the world; freestyle skier Mikaël Kingsbury, Olympic Gold medalist in moguls; cross-country skier Alex Harvey, double World Champion; weightlifter Christine Girard, Olympic gold and bronze medalist; hockey players Mélodie Daoust, Charline Labonté and Caroline Ouellette, several-time Olympic gold and silver medalists; and divers Jennifer Abel and Roseline Filion, winners of multiple medals internationally.

About National Bank of Canada
With $281 billion in assets as at October 31, 2019, National Bank of Canada, together with its subsidiaries, forms one of Canada's leading integrated financial groups. It has more than 25,000 employees in knowledge-intensive positions and has been recognized numerous times as a top employer and for its commitment to diversity. Its securities are listed on the Toronto Stock Exchange (TSX: NA). Follow the Bank's activities at nbc.ca or via social media such as Facebook, LinkedIn and Twitter.

About the Quebec Foundation for Athletic Excellence (FAEQ)
The FAEQ (faeq.com) is recognized for its personalized approach, rigorous management style, and influence in sport and education circles. In 2019, it awarded $1,500,000 in individual bursaries to 500 student athletes from all over Quebec, to whom it will also provide academic guidance and sport/study conciliation services. Two public events benefitting the FAEQ will take place next year: URBAN SUGAR SHACK with Laurent Duvernay-Tardif on Tuesday, April 7 at 11:00 a.m. at Windsor Station (visit faeq.com for details) and the fourth edition of the DÉFI 808 BONNEVILLE, a festive cycling and corporate event on September 18 and 19, 2020 at Mont Tremblant (visit defi808bonneville.com for details).