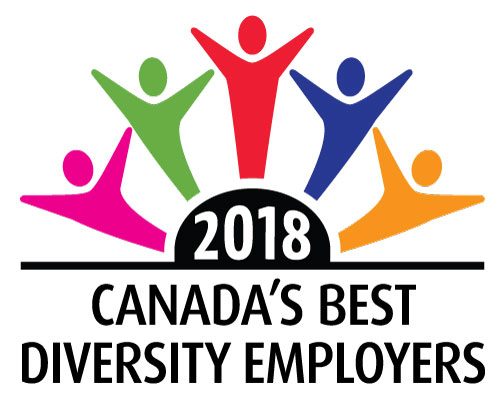 National Bank is proud to be named one of Canada's Best Diversity Employers, as ranked by Mediacorp Canada Inc., for an 8th consecutive year. This prestigious competition recognizes Canadian companies that stand out through their efforts to create diverse, inclusive workplaces.

- Teams at the Bank include employees from some 70 different countries.

- Employees who are members of National Bank's IDEO Network – for the LGBT community and supporters – got involved in the Canada Pride festivities in Moncton, Quebec City, Montreal and Toronto.

- The representation of women in management positions, which now stands at 38%, is among the highest in Canada. In 2017, Women in Governance recognized the Bank's efforts to support the advancement of women by awarding it Parity Certification Gold honours.

- With its assistance service that makes it easier for newcomers to get settled in Canada, the Bank is furthering is commitment to diversity.

About National Bank of Canada
With $251 billion in assets as at January 31, 2018, National Bank of Canada , together with its subsidiaries, forms one of Canada's leading integrated financial groups. It has more than 21,000 employees in knowledge-intensive positions and has been recognized numerous times as a top employer and for its commitment to diversity. Its securities are listed on the Toronto Stock Exchange (TSX: NA). Follow the Bank's activities at nbc.ca or via social media such as Facebook , LinkedIn and Twitter .