Bleu de bleu, a little story about a big work of art 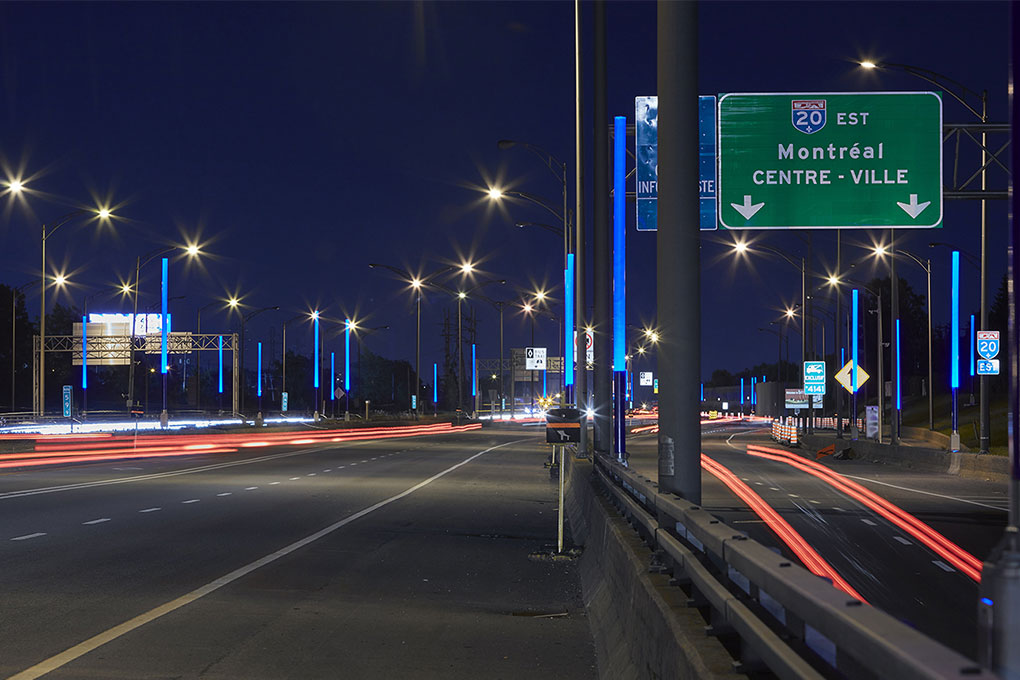 A new work of art has taken its place in the Montreal landscape. Bleu de bleu, by Alain Paiement, now welcomes citizens and visitors coming from the Montréal–Pierre Elliott Trudeau International Airport and accompanies them the length of Highway 20 right up to the edge of the city.

It’s experiential, a legacy to Montrealers and at the same time transforms the route connecting the airport to downtown into a bold, creative journey representative of the city.

Bleu de bleu is a project that required commitment from a diverse array of partners, and is the product of an extraordinary display of teamwork. It’s a project that brings people together and reflects the spirit of Montreal and its great builders. In that sense, it joins a long tradition which makes it an appropriate way to highlight the 375th anniversary of the city.

Bringing an idea to life in a multidisciplinary team

At the outset, the Bleu de bleu project was born of the National Bank’s desire to embellish a stretch of the highway while giving Montreal a gift for its 375th anniversary.

Three years before the project was launched, Credo Productions and its collaborators carried out a feasibility analysis to start turning the National Bank’s idea into a reality. Allying with solid partners was essential to support this large-scale artistic initiative.

“Road safety was one of the major challenges we faced, to make sure the work wasn’t a distraction for drivers,” explains Charlotte Belleau, Experiential Producer at Sid Lee. “From the get-go, we worked in close collaboration with the Ministry of Transport to evaluate all the proposals we received from artists for this project. Then, our role was to ensure that the artistic integrity of the project was respected. It was a true example of teamwork, bringing together people from the arts, engineers, electricians, who all supported the artist’s work to make sure it came to successful fruition.”

A jury made up of representatives from the arts, design and architecture was formed to choose the artist who would carry out the project.

Six artists were invited to submit. The jury’s final selection was Alain Paiement.

The Musée d’art contemporain, also a partner, will develop an initiative to keep the work alive after it’s dismantled in five years.

Alain Paiement, creator of Bleu de bleu, works primarily with images and notions of geography and mapping. An experienced artist, he’s been involved in more than 150 exhibitions during his career.

“The idea behind this work is to qualify the road people travel, and to travel alongside them like a sound wave,” he explains. “This wave encounters elements of the highway along its route: lights, safety features, signage. It enters into a dialogue with these elements. The colour blue wasn’t chosen at random. It takes into account the significance of colours on the road. Blue has several symbolic and metaphoric dimensions. When you arrive in Montreal, it’s the first colour you see on the runway. It’s also the colour associated with Quebec, the north, the river. It’s a peaceful colour.”

Long interested in urban architecture and cartographic photography, he hoped to have the opportunity to create a large-scale art installation integrated into an open urban space and involving travel.

“With this kind of work, you’re not just looking at an art object, it’s a spatial experience,” continues Alain Paiement. “My goal wasn’t to create something spectacular, but to mark the space in an original way. It’s only through time and use that we’ll see the reach and impact of this piece. I think we need markers like this in the city and I am deeply honoured to have been part of this. I was very fortunate to be extremely well supported. It’s a complex project with financial, administrative and safety issues to contend with. It required a great deal of tact, research and patience, and if I succeeded, it’s because I had an exceptional team around me. That’s the advice I would give to any artist who wants to carry out a large-scale project: surround yourself with the right people.”

Finding solutions for every challenge

An installation as large as Bleu de bleu involves its fair share of technological, logistical and physical challenges. Matane Productions, a company that regularly works on public art installations, was hired to execute Alain Paiement’s vision.

“It’s rare to carry out a project this big, and completely unique in that we were working on the side of the highway, so we were under the supervision of the Ministry of Transport,” says Frédérick Lalonde, President of Matane productions. “It’s more complicated than installing a piece in a field, for example.”

The biggest challenge was working in an environment that wasn’t designed for art.

“It’s a concrete jungle, far from any museum. Just to install a single element took three hours of preparation before the workers could start. There were a ton of safety procedures to respect. It was completely new for us, and for the Ministry as well. They were excellent collaborators, but for both organizations it was a learning experience,” adds Frédérick Lalonde.

An art project with R&D allure

The project required the company to undertake significant research and development.

“It took a lot of research to find things that would be artistically interesting, but that would also be able to integrate with a highway. We did a lot of testing ahead of time, particularly at Parc Jean-Drapeau, installing structures and materials and testing them with moving cars to ensure that they would be visible. We also developed a blue cylindrical light with the artist. It needed to be visible and interesting, without distracting drivers. It was an exercise in finding balance between the artistic and the functional.”

The pride of cultural heritage

For the National Bank, already committed to philanthropy in hospitals and universities, art is also an important part of society and it’s important to showcase our artists. The National Bank Collection, which includes more than 7,000 original works, is one of the largest corporate collections in Canada.

For the Bank, it’s important to stimulate a feeling of pride with regards to our cultural heritage. The City of Montreal’s 375th anniversary celebrations represent a golden opportunity to celebrate this passion for art!

Tags :
Operations, In the spotlight