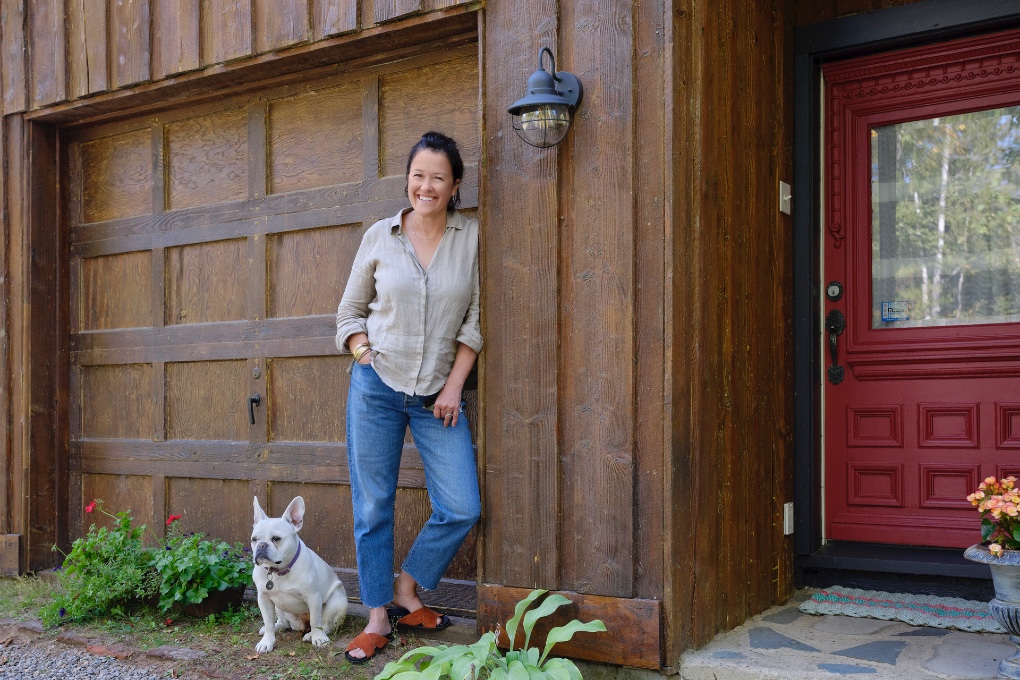 Maryse dreamed of retiring at 55. It wasn’t just a fantasy—through concrete planning and careful decision-making, her long-time wish came true. In addition to spending her days by the lake and travelling with her husband, she also has a job just for fun. “We keep an eye on our budget and follow our plan to make sure we don’t break the bank!”

“For 12 years, we focused on our goal of retiring at 55. We saved up throughout our working lives. It didn’t fall into our laps!” says Maryse, now 56, as she looks back on her path to retiring young.

Three years ago, tired of the stress and the weight of her responsibilities, she closed their diner in Val-David so she could “take it easy for the rest of my life.” A year and a half later, it was her husband’s turn to leave his job in the newspaper industry.

“The diner was our pre-retirement project. But I realized that the restaurant business wasn’t really our thing,” she said. Maryse has a background in beauty and fashion in magazines, and later was the head of a talent agency that she co-founded. “After I sold my shares of the company in 2013, we looked for something that would allow us to live out in the country. That’s how we came up with the idea of opening a seasonal restaurant. Running the place was fun, but it was demanding. I was doing everything: personnel management, inventory, customer service.”

The start of a new life

In 2016, they sold the restaurant as well as their home in Laval. She said goodbye to her responsibilities and hello to the simple life. “Our kids have left home. One lives in the Côte-Nord region, and the other travels often to Europe,” says Maryse.

The couple fulfilled one of their dreams with the money they saved up when they bought a little house in the Laurentians by the water, surrounded by trees.

After that, they achieved another dream: they bought a camper so they could travel for a year across the United States and Canada. “Travelling in an RV sounds nice, but it ends up being expensive with the gas and the campground fees,” says Maryse. “We sold it so we wouldn’t lose our investment. Now we just use a tent!”

Retiring early is one thing; staying active is another. As a sociable, curious and creative person who doesn’t want to “age prematurely,” Maryse pushes herself to take on new challenges. “I want to learn and to take care of myself,” she says.

She’s always busy with activities and projects, and even works part-time in a bistro in Val-David. As for her husband, he sometimes takes on contracts as a business consultant. Says Maryse: “It allows me to socialize and to be active. And it provides me with a little supplemental income. There’s no stress because it’s just for fun! You reap what you sow: We do whatever we want, within our means.”

However, additional income can lower your government benefits and other income upon retirement. It’s a good idea to discuss the matter with your financial planner. Some strategies can help you optimize your savings, like the rate at which you withdraw from your investments and income splitting between spouses.

The couple met with a financial planner diligently for guidance and to make investments in order to fund their retirement. “We estimated our needs, our resources and our goals,” says Maryse. “We have a diverse portfolio (TFSA, RRSP, GIC, long-term investments), plus a small emergency fund. And we don’t have a mortgage or any debts.”

“Retirement is different for each person, depending on their dreams and their means,” says Mohamed Wakkak, financial planner at the National Bank. “To turn your dream into reality, you need to set up a retirement plan. Once we have an idea of the kind of lifestyle you want and how much you’re saving, we can then envision different scenarios and see how they’ll change over time.”

These days, the couple limits their expenses—“I’m still into fashion, but I stay away from stores!”—all while allowing themselves the occasional indulgence and the chance to travel once in a while. “We take a look at our budget every now and then. Before the end of the year, we’ll even be able to make adjustments if we need to!”