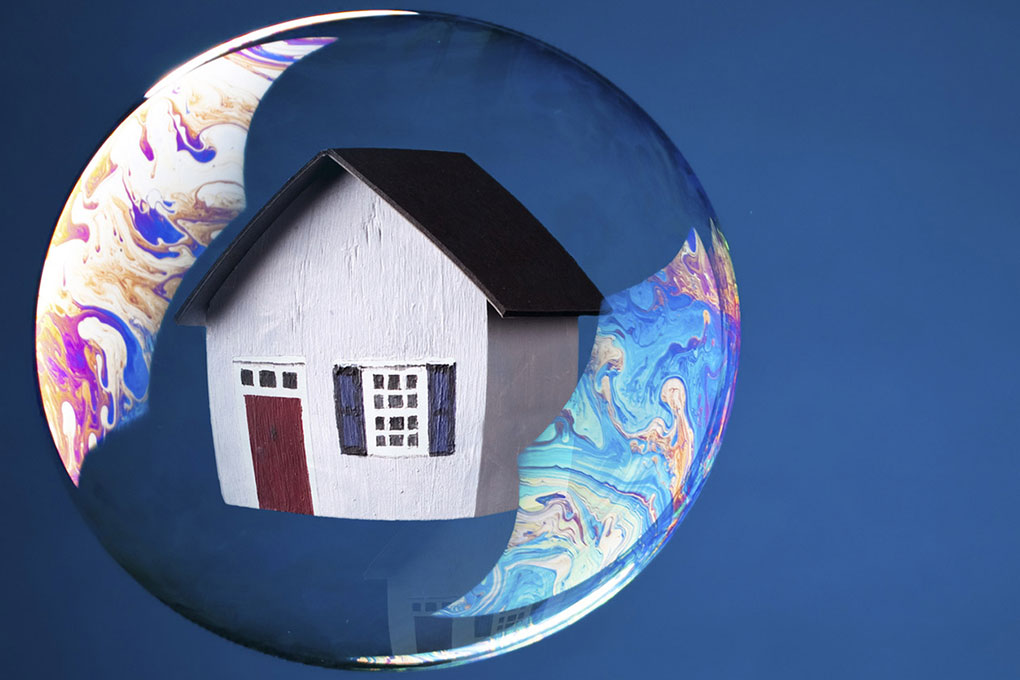 Since the subprime mortgage crisis in the United States, many Canadians fear a similar real estate bubble in this country. This uncertainty has fueled current increases in real estate prices in some parts of Canada. Are we experiencing a real estate bubble? Two experts weigh in.

“A bubble is when we see a lot of speculation,” explains Marc Pinsonneault, principal economist at National Bank.

Bob Dugan, chief economist at Canada Mortgage and Housing Corporation (CMHC), defines a real estate bubble as an “extreme overvaluation” of properties. In his view, it requires the alignment of several economic factors—for example when the rates of employment, economic and population growth do not justify the growth in housing prices. This leads to an “extreme imbalance” in the real estate market.

Why worry? On one hand, an overheated market can limit access to housing. On the other hand, all bubbles eventually burst and when a real estate bubble bursts, prices tend to fall quickly and significantly. Unfortunately, it’s impossible to confirm whether a bubble exists until it bursts.

What is happening in Canada? “There’s no real estate bubble, except perhaps in Vancouver,” states Marc Pinsonneault.

Vancouver, the city to watch

Between February and May 2016, the average resale price of homes in Vancouver rose by two percent per month, according to the Teranet index. That’s an annual rate of 21.7 percent.

“It’s clearly not normal,” says the principal economist at National Bank. “The underlying economic fundamentals don’t support these kinds of increases. So a bubble is likely forming.”

Bob Dugan doesn’t use the word bubble, but recognizes that Canada’s western metropolis inspires a great deal of concern. In the most recent version of his quarterly evaluation of Canada’s housing market, CMHC refers to “heightened indications of an overvaluation” in the region. The situation has only gotten worse in the last few months.

Regardless, CMHC suggests that Vancouver’s housing market has regulated somewhat. “The local economy is strong, the population is growing and so are employment levels,” explains the organization’s chief economist.

Strong demand for housing fed by foreign capital—most of it from Southeast Asia—is the apparent driver of the recent growth in prices, according to both economists. Prime Minister Justin Trudeau agrees. During a CBC radio interview broadcast on June 17, the Prime Minister said that “foreign capital evidently plays a role” in Vancouver’s housing crisis.

Teranet’s index also shows a significant increase in Toronto real estate prices: resale prices are rising by an annual rate of 10.6 percent. The increase is even greater in the nearby city of Hamilton, where Teranet’s index shows an annual increase of 13.8 percent between May 2015 and May 2016.

The region’s strong economic performance gives some reassurance to both Marc Pinsonneault and Bob Dugan. CMHC acknowledges that there are “many signs of problematic conditions” in Toronto due not only to overvaluation, but also to excess construction of condominiums.

A stagnant market elsewhere in Canada

“We really have a dichotomy when it comes to housing markets,” summarizes Marc Pinsonneault. “Toronto, Hamilton, Vancouver and Victoria are seeing rapid price increases, while the rest of the country is seeing the opposite.” In the seven other metropolitan markets tracked by Teranet, prices either remained stable or fell during the last year.

CMHC also believes that real estate is overvalued in four other regional municipalities—Calgary, Edmonton, Saskatoon and Regina—but attributes it to the economic problems caused by the recent drop in oil prices and the associated decrease in employment levels across the Prairies.

In the Regional Municipality of Montréal, resale prices rose a scant 0.3 percent between May 2015 and May 2016, according to Teranet, which recorded a drop of 3.6 percent for the region of Quebec during the same period. In its most recent report, CMHC noted “moderate signs of problems” in these two markets, notably because of the large numbers of shared-ownership properties available.

Marc Pinsonneault reassures investors that there is little risk that other Canadian regions will experience the problems facing Vancouver. “It’s extremely unlikely that Vancouver’s real estate issues will appear elsewhere in the country,” he concludes.