Fixed or variable rate: a question of monthly mortgage payments 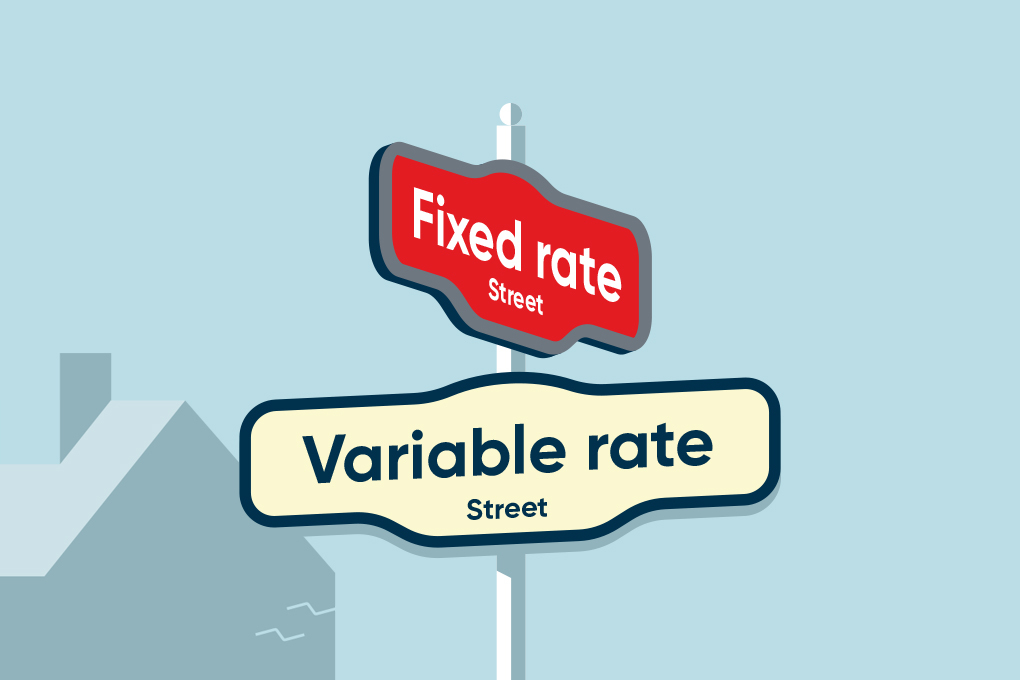 Once you’ve settled the question of open or closed term, you will inevitably have to decide between a fixed and variable rate. Which is best for your situation?

Where do I start if I want to buy a home?

We're here to answer your questions.
Even from a distance.

When the time comes to choose your mortgage term, there are a number of elements to take into account, including your financial means, your risk tolerance and the economic situation. To demystify it all and equip you to make the best possible decision, here’s some information that will help you make an informed choice about your mortgage type.

Fixed- versus variable-rate: which is lower?

As a general rule, variable-rate mortgages tend to be lower than fixed-rates. To understand the difference, you need to look at how these rates are calculated. Essentially, a financial institution’s variable interest rate corresponds to its preferential rate. This is established based on the Bank of Canada’s overnight rate. Add a certain percentage to this, and you have the variable rate.

As with fixed-rate mortgages, the monthly payment amount usually stays the same, but the ratio of interest to principal is subject to market fluctuations. There are also certain types of variable-rate mortgages where the monthly payment varies based on the fluctuation of market interest rates. With a fixed-rate mortgage on the other hand, you are guaranteed to always have the same amount dedicated to repaying your principal, regardless of what the market does.

What creates variations in mortgage rates?

Following a rise in the prime rate, financial institutions generally raise mortgage rates, though not always. This won’t impact fixed-rate mortgage holders much until the end of the term, however variable-rate mortgage holders will feel the change almost instantly. It’s important to remember that this impact isn’t restricted to mortgages; it also affects savings accounts, credit lines and other financial products.

Rate hikes and your budget

An increase in the prime rate and, consequently, in mortgage rates, isn’t necessarily a catastrophe. It all depends on several factors. For example, if the prime rate goes up by 0.25%, the impact on variable-rate mortgages is minimal. If you had a $300,000 mortgage, the increase would translate to about $36 more a month. Hardly enough to break your budget.

Watch out, though. The situation can be far more severe if you have a variable-rate mortgage and your initial loan exceeds the limits of your budget.

Faced with relatively low borrowing rates, some buyers have been able or might be tempted to buy a property that stretches the limits of their purchasing power. Then, if interest rates go up, they find themselves in a bad financial position.

To make sure that you aren’t adversely affected by increases, make your monthly mortgage payments based on the fixed rate. That way, your mortgage repayment will be accelerated and at the time when the variable rate equals the fixed rate, the margin will leave you enough time to decide if you want to go from variable to fixed. In summary, as with all things concerning money, the golden rule comes back to respecting your financial means when you buy a house.

Because a mortgage payment is generally the biggest line item in most people’s budgets, many people choose to take out insurance (life, disability, critical illness) to ensure that their mortgage payments can still be made in case of a problem. Depending on the insurance company or financial institution you choose, the premiums on your insurance will be set based on several criteria: age, sex, smoker or non-smoker, etc. That way, for the duration of the term of the loan – for example, a five-year fixed-rate – the policy holder will pay the same premium per month. When the time comes to renew the mortgage, the insurance premiums would be recalculated.

Is it possible for the variable rate to equal the fixed rate?

In many of his studies, York University finance professor Moshe Milevsky analysed the cost of a five-year, fixed-rate mortgage in relation to a variable-rate mortgage over the same term, for the period between 1950 and 2000. The results showed that borrowers who took fixed-rate mortgages over five years paid more interest. On the other hand, the author also highlighted the fact that one-year terms, both fixed and variable, were more financially beneficial to borrowers.

But, as with any financial product that fluctuates with the market, it’s important to factor your tolerance to risk into your decision-making.

What step are you at?

Starting to look around?

Lock in preferred rates for a mortgage loan.

Get financing to realize your project.

Apply for a loan

Prefer to speak to an expert?

Fill out our contact form to discuss your project and schedule an appointment with an advisor.

Where do I start if I want to buy a home?

We're here to answer your questions.
Even from a distance.